From now on PhotoMapper Desktop, the GPS photo management solution is available for ArcGIS 10.2.

With PhotoMapper Desktop you can search and import available Photo-Databases to your GIS-Layers within just a few clicks. Already created photo databases can be searched automatically and be integrated in your personal GI-System.

PhotoMapper Desktop offers a broad range of additional functions to increase the efficiency of any Photo Management within ArcGIS. Therefore it does not matter if GPS information is already available in the photo's exif header or not. If not, with the simple Drag&Drop functionality, photos can be dragged to their map-location of origin to add necessary GPS coordinates to the photo's exif information.

PhotoMapper Desktop works as an Add-On application for your existing ArcMap document and gives the opportunity to add photos as a layer to your individual maps.

The capture location of the photo will be converted automatically to a point feature layer. When moving over displayed points on the map, the relevant photos will be shown-without any clicks necessary.

Compatibility with ArcGIS for Desktop 10.2.1

Photos can be sorted in the PDF report via memo value

The photos in the PDF reports can be sorted immediately via memo value.

Compatibility with ArcGIS for Desktop 10.2

The feature to add unreferenced photos the directories are now sorted in alphabetical ascending order if the file system allows such a sort.

If the limit of the path name length is reached the therefore the thumbnail could not be generated the user gets a message. The photo is still added to the attribute table of the photo layer but won't be exported to a pdf report.

Directional arrows for features from PhotoMapper Server Import exporting to ArcGIS for Server 10.1

Arrows can now be displayed for features from PhotoMapper Server under ArcGIS for Server 10.1.

Connection to PhotoMapper Server based on ArcGIS for Server 10.1

Starting with version 5.2.0 features from PhotoMapper Server based on ArcGIS for Server 10.1 can be accessed.

In the PDF report, the title for the overview map can be customized. 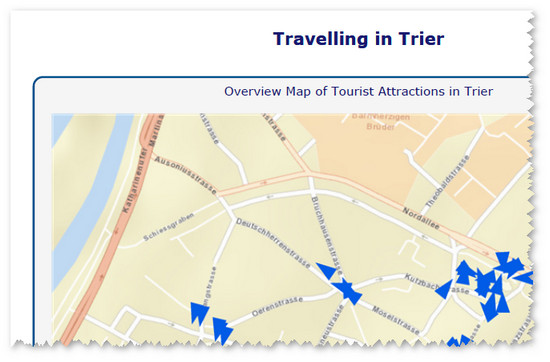 PhotoMapper Desktop for ArcGIS 10.1 for Desktop

You can now use the ArcGIS extension PhotoMapper Desktop for your GPS photo documentation with the new ArcGIS Version 10.1.

Storing of the configuration for PDF reports

The creation of PDF reports is even easier now. With the new version you can save the configuration for your PDF reports and reload it for new reports.

New possibities for the layout of PDF reports

There are new options to configure the layout of the PDF report. You can now change the format of title and description as well as the colors and styling of the edging. With PhotoMapper Desktop 10 you could already integrate a general map and a detailed map into your PDF report. Now you can also define the scale of these maps. 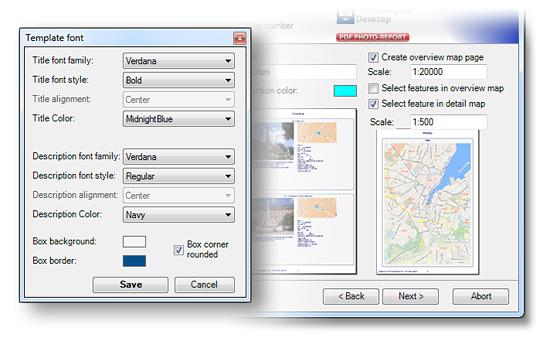 As another improvement you can now select the features that shall be exported from ArcMap. Only the selected photos are then merged into the PDF report.

Reduction of the PDF-report size

With the new version 5.1 the size of the PDF reports has been reduced dramatically. Now the reports have only about one quarter of the previous size. 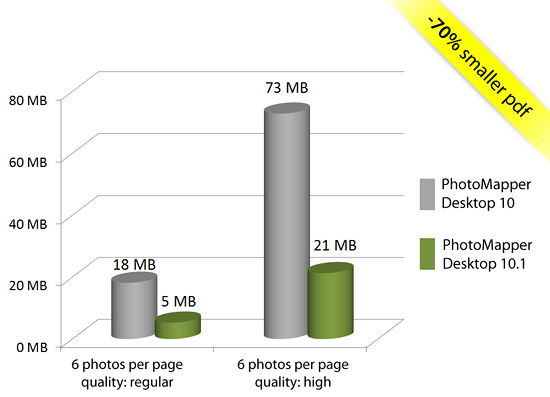 Let your maps speak for themselves. Create engaging maps using the implementation of photos in your ArcGIS 10. With PhotoMapper Desktop 10 photos are added automatically to maps, based on their GPS- and Compass-information. Photos without this information can be moved via drag & drop to the desired location on the map. The new position and direction can then be written back to the Exif-information of the added photos.

From now on layers can be structured in groups, still offering the user the full range of functionality like slideshows, zoom, pan etc.

With GPS PhotoMapper NG2, the alta4 developer team takes off to the next generation of geoimaging.

Based on modern .NET technology and with completely reworked control elements, the new GPS PhotoMapper NG is clearly structured and user friendly .

Data management and photo handling in the table of content has never been so easy. Photo viewing with mouseover functionality and tool organization in a context menu makes the handling easy and intuitive. 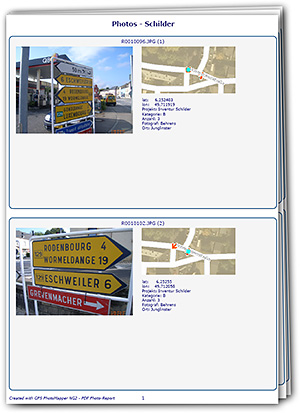 With GPS PhotoMapper NG2 you can create clear anddetailed pdf reports with just a few mouse clicks. Select the pictures and attributes to be exported and integrate a map in which the picture is localized.

An overview map gives you an overview over each recording location. 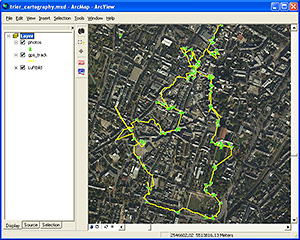 You have recorded a log file while making the pictures? With GPS PhotoMapper NG2 you can easily integrate your gps tracks within the GIS. You always know where you've been. 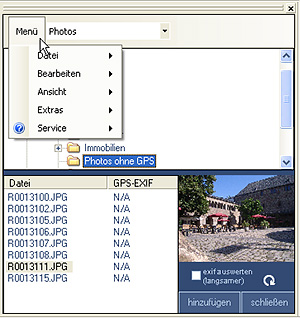 The common graphical surface has been revised with simplified control elements. The toolbar contains only five elements. This leads to a much clearer arrangement and to an easier and more intuitive handling.

Cascading the menu offers a space saving access to the single menu items. 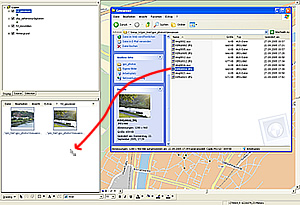 In GPS PhotoMapper NG the picture managment is dynamically controlled by means of the ThumbnailViewer. Pictures can easily be added to a project via drag & drop. Just select the pictures in your data browser and drag them into GPS Photomapper's ThumbnailViewer. By deleting a picture in ThumbnailViewer the complete dataset will be removed. 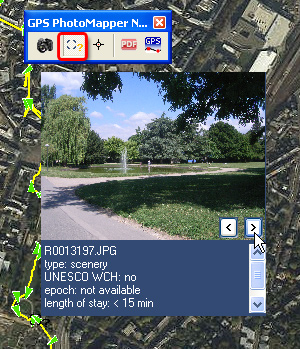 Because of the new MouseOver-feature it's much more comfortable and faster to work with your map. By moving the mouse over a picture point feature the pictures will be displayed dynamically.

Closely located pictures will be displayed in a rotating slideshow. By a simple click the selected photo will remain. Now you can navigate between the concerned pictures comfortably by using the arrow buttons. 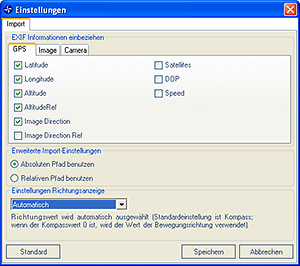 Decide by yourself which kind of direction information will be used - the compass viewing direction or the walking direction. Or just let GPS PhotoMapper determine the best option.

The picture's EXIF header contains plenty of information. Not all of it is wanted by the user or wanted for the project. To improve the arrangement GPS PhotoMapper NG2 you can select by yourself which fields shall be imported.

The new data format offers a better performance and is independent of the used operating system. The possible data amount is much more extended. Furthermore you will have the possibility to compress and encode the files. The Personal Geodatabase will be supported further on.

With the new version you have the possibility to integrate pictures into already existing feature classes. This allows to add pictures without disturbing the clarity. Further on, it allows suggestive workflows for several users working on one project who want to add pictures independently from each other.

Tourist sights in the city of Trier

Tourist maps with photos of historical sights, hotels and restaurants are crucial to tourism.

With GPS PhotoMapper, it has become much easier to collect photos, connect them with additional information and show them on a map.

Documentation of a culture path in Luxemburg 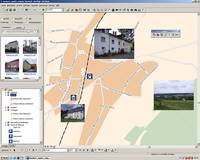 Documentation of old houses and mills along a so-called culture path in Luxemburg. 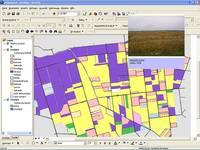 Biotope mapping has become a common instrument for the monitoring of nature and landscape.

Dr. Ulrich Michel (FZG) experienced a reduction of the expended work due to the hard- and software from alta4. With the help of the digital camera from RICOH and the software GPS PhotoMapper, it is possible to display the recorded test fields directly in the GIS. 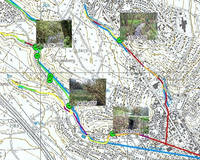 Status quo documentation on rivers or streams in the scope of water resource management.

The photographic documentation of man-made modifications and barriers, e.g. weirs, barrages or ramps, is of great importance. Also the river bank condition, the ecological situation in the water, levels and monitoring stations are recorded. 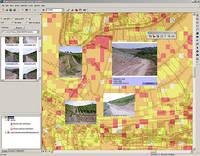 The photos taken and integrated with the GPS PhotoMapper solution add important information, e.g. whether the location is construction land, and document already existing damages.

This allows the responsible agencies to act early enough and prevent or reduce damages.